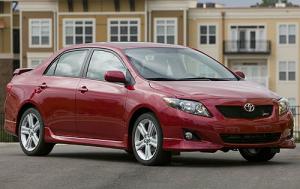 Completely redesigned, the 2009 Toyota Corolla looks much the same as last year’s model but is a bit larger inside and out. Highlights on the new car include an available 2.4-liter engine and a navigation system.

About 400,000 people will buy a Toyota Corolla sometime during the 2008 calendar year. One-quarter of these likely buyers are in their 60s. Almost as many are in their 20s. Despite the huge age gap between these groups, their primary motivation for buying is the same: reliability. With such a steady and diverse following for its compact sedan, Toyota usually undertakes major redesigns with a light hand: Although changes underneath the surface may be significant, each new Corolla invariably retains its predecessor’s basic styling cues and overall driving demeanor. And so it is with the redesigned 2009 Toyota Corolla.

That’s not to say you won’t appreciate the differences on the new Corolla. For instance, although it’s not any longer or taller than last year’s car, it rides on a wider track, and this opens up noticeably more hip- and shoulder room in the cabin. The addition of a telescoping steering wheel improves upon the Corolla’s historically awkward driving position, while new features like an auxiliary audio input, keyless startup and a navigation system with real-time traffic updates bring Toyota’s compact sedan into the 21st century in terms of feature content.

Since fuel economy is another big reason people buy Toyota Corollas, most versions of this sedan continue to use an efficient 1.8-liter four-cylinder. This engine is heavily revised for 2009 and now features variable timing for both its intake and exhaust valves. Power increases are modest on paper, but the results are apparent on the road: In spite of a 200-pound weight gain, the 2009 Toyota Corolla is a touch quicker than the ’08 model and capable of returning comparable gas mileage.

Most of the Corolla’s rivals offer larger engine options, though, and for ’09, Toyota is following suit. The high-line XRS trim level returns to the model line, and it’s motivated by a 158-horsepower, 2.4-liter inline-4, which promises to shave a second off the car’s 0-60-mph time. In keeping with its heightened performance focus, the Corolla XRS has quicker steering, bigger wheels and a front strut tower brace.

With two engines and five trim levels at their disposal, most 2009 Toyota Corolla buyers will have little difficulty equipping one to taste. Although competitors such as the Honda Civic, Hyundai Elantra, Mazda 3, Mitsubishi Lancer and Nissan Sentra offer comparable interior room and amenities, Toyota’s compact sedan remains a fine choice for a commuter car given its composed ride quality, above-average gas mileage and high overall level of refinement. However, we question whether the company has done enough to meet increased expectations for performance and handling in this class. Even in sporty XRS trim, the ’09 Corolla does little to engage its driver. Shopped against genuinely entertaining alternatives like the Mazda 3, Civic and Lancer, Toyota’s economy sedan remains a tough sell.