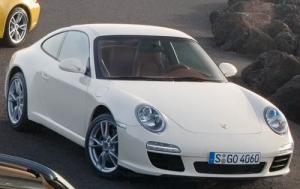 Options prices can really add up.

For 2009, the Porsche 911 gets some significant updates, including refreshed front and rear fascia, new direct-injection engines, bigger brakes and a new touchscreen interface in the center stack. New options include an automated manual gearbox that replaces the Tiptronic automatic transmission, ventilated seats, Bluetooth, satellite radio and an audio connection package that includes a dedicated iPod adapter, auxiliary jack and USB port.

Few modern sports cars are worthy to be deemed icons. With its classic design and prestigious motorsports pedigree, the rear-engine Porsche 911 is one of the most enduring and historically important high-performance cars on the market today. A host of new features take the 2009 Porsche 911 to the next level, including more powerful and efficient engines, a revised entertainment system and an optional, state-of-the-art automated manual transmission. Combined with a refreshed exterior, the new 911 improves on an already superb combination of sharp looks, ferocious performance and daily drivability.

The 2009 Porsche 911 gets a power and fuel economy boost over its predecessor thanks to direct-injection, flat-6 engines. The 3.6-liter base Carrera gets 345 horsepower, up from 325, and the 3.8-liter Carrera S gets a 30 hp boost for a total of 385 hp. In addition, combined fuel economy has improved by about 10 percent. The new seven-speed automated manual transmission, known as PDK (an acronym for Porsche-Doppelkupplungsgetriebe), utilizes the same type of “dual-clutch” design that Volkswagen uses for its highly regarded DSG transmissions. While driving, PDK will pre-select the next gear, so when it comes time to shift, the next gear can instantly take over — virtually eliminating the lag in shift time. Like other transmissions of this type, PDK can be placed in a fully automatic mode or shifted manually via steering-wheel-mounted buttons. Porsche says the software controlling the PDK also knows whether to plan for an upshift or downshift based on certain parameters, such as hard acceleration and braking.

In previous years, we bemoaned the 911’s lack of in-cabin entertainment and communications features. No longer. The 2009 Porsche 911 gets a revised Porsche Communication Management (PCM) system, which includes a bigger touchscreen display, an easier-to-use interface and options such as Bluetooth and iPod, USB and auxiliary connectivity. Also added to the options list is a new hard-drive-based navigation system and satellite radio with real-time traffic. All of this, plus new ventilated seats and a manual transmission hill holder solidify the 2009 Porsche 911’s place as a realistic daily driver option.

That’s not to say there isn’t some stiff competition out there. New supercars such as the Nissan GT-R and Audi R8 tend to get more attention, both in the media and on the road. But the GT-R lacks the build quality of the 911, and its plethora of electronically controlled systems make for a much more “video game” driving feel. The R8’s sumptuous cabin rivals that of the Porsche, but it’s less practical and its R tronic transmission lacks the speed or the smoothness of the PDK. And neither, of course, can match the 911’s rich history and pedigree. The Aston Martin V8 Vantage might be a suitable alternative, but although it offers an elegant and timeless design, it doesn’t have the 911’s chops when it comes to performance. Bottom line? The 911 is simply the best all-around high-performance sports car you can buy for 2009.