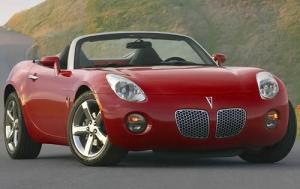 The big news for the 2009 Pontiac Solstice is the debut of a new hardtop model with a removable roof, which comes in the same base and GXP trim levels as its soft top counterpart. Also added to the lineup is the soft top Solstice Street Edition, which includes upgraded standard features and a sport suspension. Remaining changes this year are feature-related. The base Solstice now comes standard with previously optional items like ABS, stability and traction control and a limited-slip rear differential. Bluetooth connectivity is a new feature this year, available on all models.

There are few cars in the $20,000-$30,000 range that can turn heads quite like the Pontiac Solstice. Even though it’s entering its fourth year of production, this curvaceous roadster still commands looks from fellow drivers and passers-by. This sexy styling, along with the Solstice’s able powertrain and sporty driving dynamics, have made it a sales success. For 2009, Pontiac has added even more varieties of Solstice to the menu.

Most notably, this model year sees the debut of a Solstice coupe that’s available in the same base and GXP trim levels as its roadster sibling. Like the Chevy Corvette, the Solstice coupe actually has a targa-style removable roof panel. Pontiac says it’s concave on the inside to allow for more headroom — slightly more than 37 inches total. The coupe keeps the roadster’s rear fenders and rear fascia, but features a slightly different taillight design, and the deck lid is topped with a sleek-looking (and functional) ducktail-style rear spoiler. And although the interior remains mostly the same as the original Solstice, the area behind the coupe’s seats has been redesigned for better access to the cargo area. The result is a car that keeps the original Solstice’s sexiness while offering added rigidity and versatility.

Another addition to the 2009 Pontiac Solstice lineup is the Street Edition, which combines the base Solstice’s 2.4-liter four-cylinder engine with the GXP’s performance-oriented suspension. We’re not quite sure of the logic behind putting the lower-powered engine and all-season tires on a stiffer suspension, but standard features such as air-conditioning and an upgraded seven-speaker audio system offer a level of comfort above that of other Solstice trims.

As before, the soft top 2009 Pontiac Solstice’s chief competitor is the Mazda MX-5 Miata. The Solstice (as well as its twin, the Saturn Sky) may have the advantage when it comes to looks and straight-line performance, but the Mazda still beats the Pontiac in day-to-day enjoyment thanks to its more athletic personality, quicker-revving engine, a more polished demeanor and an effortless drop top (including an available retractable hardtop). The Mazda is also more practical and enjoys a vastly superior reputation for reliability. We’d take the Miata over the base Solstice roadster any day, but the powerful GXP is tougher to resist — and even more so in coupe form.