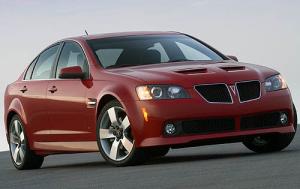 The 2009 Pontiac G8 receives standard XM Satellite Radio across the board, and the high-performance G8 GXP makes its debut, featuring a detuned version of the Corvette’s V8 along with a sportier suspension and an optional manual transmission.

Thanks to a long line of uninspiring products over the past couple decades, Pontiac — ostensibly GM’s “driving excitement” division — acquired a rather unfortunate reputation as fodder for rental-car fleets. But that’s been changing as of late, thanks to a concerted effort by GM to reassert the brand’s high-performance heritage. The 2009 Pontiac G8 is at the core of Pontiac’s recent resurgence. This powerful yet refined rear-wheel-drive performance sedan is unlike anything Pontiac has offered in recent memory — and we mean that as a sincere compliment.

The Pontiac G8 is a mechanical twin of the Commodore sedan from Holden, GM’s Australian subsidiary. That’s a good thing, as the Commodore has garnered accolades Down Under for providing affordable full-size functionality in a swift and agile package. Thankfully, Pontiac stylists resisted the urge to outfit the American version with the brand’s traditional assortment of scoops, vents and spoilers, and the car looks muscular and purposeful from most angles.

The G8’s mechanical merits are impressive, from its range of energetic engines to its impressive combination of sharp handling and supple composure over broken pavement. The new 2009 GXP model raises the performance bar even higher with a 402-horsepower version of the iconic Corvette’s 6.2-liter V8. One of our few complaints about the G8 has been the lack of a manual transmission, so we’re pleased to report that you can get one on the GXP (though still not on lesser G8 models). In any guise, the G8’s BMW-like MacPherson front strut layout and multilink rear suspension yields a sophisticated driving character that’s more typical of European sport sedans than large domestic rear-drivers.

The G8 also impresses inside, especially considering the plasticky depths to which Pontiac interiors had previously sunk. There are still too many hard surfaces, but the center stack — save for a couple cheesy Atari-grade digital readouts at the top — is more than a little reminiscent of Audi’s industry-leading efforts. Passenger room is plentiful, particularly in back, where all but the largest riders will have space to spare. The rear center seat isn’t so hospitable, however, as the wide center tunnel necessitated by the G8’s rear-drive layout essentially eliminates legroom there.

At the G8’s moderate price point, the Dodge Charger/Chrysler 300 twins are the only other roomy, rear-wheel-drive, full-size performance sedans available. The Chrysler siblings are certainly competent, but the G8’s sporting character sets it apart. We’re not fans of the G8’s lackluster fuel economy, but then, the Charger/300 duo aren’t likely to win any efficiency awards from the EPA either. Bottom line: If you want a large sedan with American attitude and Continental manners, the 2009 Pontiac G8 is in a class of its own.