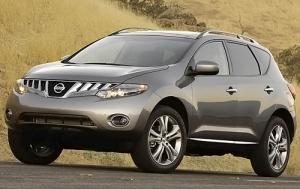 After a model-year hiatus, the 2009 Nissan Murano returns fully redesigned. Given its popularity, styling changes are kept evolutionary, while an upgraded cabin and key mechanical refinements further its appeal.

It’s a balancing act that would test a Cirque du Soleil performer: the task of redesigning a popular vehicle without diluting its appeal by making it too different. Such was the challenge Nissan faced when it decided to revamp its popular Murano midsize crossover SUV as an early 2009 model year release.

The first-generation Murano (it debuted back in 2004) was known for its sporty styling and sharp handling. For that first quality, not much changed for the new 2009 Nissan Murano. At a glance, especially in profile, one might have trouble discerning the new model from its predecessor. The same kicked-up beltline and triangular rearmost side windows remain, as does the general silhouette. The face is more aggressive, however, with its rather strange grille that incorporates squinty headlights. The tail retains the unique back window design (that’s thankfully a bit bigger) but takes on new, more horizontal taillights.

It’s also more of the same in regards to handling ability. Part of the old Murano’s handling credentials came about as it shared some lineage with Nissan’s athletic Altima sedan. The 2009 Murano continues that trend, though it’s now related to the latest-generation Altima that recently debuted. Meanwhile, the peppy 3.5-liter “VQ Series” V6, already highly regarded, gains 25 horsepower for a total of 265, while the continuously variable automatic transmission (CVT) — one of the old model’s more disappointing qualities — has been tweaked for sharper response.

What we notice the most on the 2009 Nissan Murano is the much nicer cabin. Inside, higher-quality materials and an upscale ambience replace the mediocre quality and avant-garde look of the previous interior. New features like a hard-drive-based navigation system and a dedicated iPod interface are also part of the redesign. One thing that didn’t change, however, is the lack of a third-row seat. No doubt, Nissan’s designers felt pressure to add one, as it’s offered on most other competing models. But in a (logical) show of defiance, Nissan felt a third row would be rather small and take up valuable cargo space, especially considering that the Murano is on the smaller side of the midsize crossover segment to begin with.

If you’re interested in this type of vehicle, you’ll find that there are more choices than ever this year. There are larger models to think about, such as the Mazda CX-9 and Toyota Highlander. But the most direct rival to this Nissan is Mazda’s CX-7, as its fun-to-drive factor rates even higher than the Murano’s. However, the CX-7 does give up some practicality due to its relatively meager maximum cargo space, and some may find its turbocharged four-cylinder a little too head-snapping for comfort. Other similar choices include the Ford Edge, the Mitsubishi Outlander V6, the Pontiac Torrent GXP and the Toyota RAV4 V6. These models typically offer more cargo space or passenger capacity, but they don’t offer the same level of athleticism, interior refinement or flair that Nissan’s star performer does.