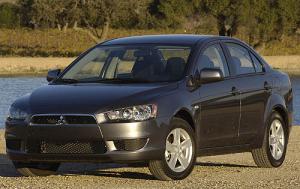 The Ralliart debuts, bringing a 237-horsepower engine, all-wheel drive and an automated-clutch manual transmission to the Lancer lineup. The GTS trim gets more performance via a newly standard 2.4-liter 168-hp four-cylinder engine. The DE and ES trim levels retain the 2.0-liter 152-hp four. The GTS also gains new gauges this year, while the Fast Key keyless ignition and entry system migrates to the Sun and Sound package, leaving the hard-drive navigation system as a stand-alone option. The ES trim gains an optional Sport package that includes some of the GTS’s styling elements, such as the big rear wing.

YouTube responded with an error: The request cannot be completed because you have exceeded your <a href="/youtube/v3/getting-started#quota">quota</a>.

Last year, the Mitsubishi Lancer had a minor problem. Visually, it promised to be more than its humble price tag would imply. The GTS trim level, in particular, boasted a giant rear wing and 18-inch wheels that fervently declared, “I can go fast.” Problem was, it actually didn’t. The car’s 2.0-liter four-cylinder engine produced class-competitive 0-60 sprints, but it had virtually no low-end power, requiring the driver to maintain an objectionably loud engine speed of at least 3,200 rpm in order to achieve even moderate passing power.

For the 2009 Mitsubishi Lancer’s lower DE and ES trim levels, the old engine carries over for the more sedate-driving, economy-minded consumer. But for the driver who wants his or her fast-looking car to be, well, fast, Mitsubishi has dropped a larger 2.4-liter engine into the GTS’s engine bay. Thanks to increased displacement, it produces 16 more hp and, more important, 21 additional pound-feet of torque. This engine is not only more responsive but also substantially quieter. Zero-to-60-mph times drop by about a second, and fuel economy — although not particularly impressive — is about the same as with the smaller engine.

This year also brings the Ralliart, which effectively bridges the performance gap between the mainstream Lancers and the ultra-performance Evo. Equipped with a 237-hp engine, all-wheel drive, a sport-tuned suspension and the same Twin Clutch, Sportronic Shift (TC-SST) automated-clutch manual transmission as the Evo, the Ralliart also gives Mitsubishi a strong rival to the Subaru WRX.

The 2009 Mitsubishi Lancer isn’t a mainstream economy car like a Honda Civic or Toyota Corolla, as it lacks the refinement, fuel economy and reputation to match up with these cars. But that’s fine by us. In addition to its aggressive styling, the Lancer boasts above-average handling and an impressive array of high-tech features that until recently were reserved for luxury automobiles. Those interested in finding the sportiest option available will want to consider the Ralliart. But even if you’re just looking for more basic transportation that’s a viable alternative to the status quo, this Mitsubishi is worth a look.

YouTube responded with an error: The request cannot be completed because you have exceeded your <a href="/youtube/v3/getting-started#quota">quota</a>.