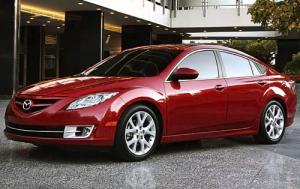 The completely redesigned 2009 Mazda 6 boasts upsized dimensions and powertrains that put it on par with segment leaders, yet it largely retains its distinctive fun-to-drive character.

If there’s a moral to the fully redesigned 2009 Mazda 6’s story, it’s that there’s more to life than “zoom-zoom.” The previous-generation Mazda 6 had plenty of it, yet Mazda had a devil of a time getting the buying public to notice. That’s because American drivers typically don’t care so much about how their family sedans behave on winding country roads. What they want is space, safety, reliability, power and style — and while the old 6 looked nice enough, its tight dimensions and lackluster acceleration prevented it from succeeding in an increasingly competitive marketplace.

The new 6 demonstrates that Mazda wasn’t going to make the same mistake twice. Want room to relax? It offers one of the most accommodating cabins of any midsize sedan, with Texas-sized front seats and a backseat fit for 6-footers. Got luggage, or perhaps four sets of golf clubs? The midsize Mazda now features an impressively large 16.6 cubic feet of trunk space. Need power? Mazda’s got you covered with the largest and most powerful V6 in this price bracket, though its fuel economy is disappointing. Want to make a fashion statement? Then you shouldn’t be buying a family sedan in the first place. But as such cars go, we think the new 6 manages to be tautly attractive, particularly from the front, despite its additional 6.1 inches of length and 2.3 inches of width. Unlike the previous model, the 2009 Mazda 6 was engineered specifically for the North American market — and it shows.

It also means added weight, as the enlarged 6 is roughly 150 pounds heavier than its predecessor. Yet you’ll still notice the sporty reflexes that consumers have come to expect from this performance-oriented brand. Body roll is minimal by family-sedan standards, and the steering is light but responsive. The 6 never lets you forget its considerable size, but its well-sorted chassis and light-on-its-feet character at speed puts it second only to the Nissan Altima in the fun-to-drive category.

Wait a minute, you’re saying — how could the “zoom-zoom” family sedan fail to be the sportiest car in its class? Three reasons: The Altima’s considerably lighter, its body motions are better controlled and its steering is tighter and more communicative. But so what? As the previous 6 demonstrated (and the Toyota Camry continues to demonstrate), top-notch driving dynamics do not a best-selling family sedan make. What the new 6 offers is the coveted combination of American-style size and power, along with above-average handling for those who care about that sort of thing. True enthusiasts may not find the 6 to their liking — but hey, that’s what the Mazdaspeed 3 is for.

In short, the 2009 Mazda 6 is at or near the head of its class in most respects. As usual, though, we recommend test-driving as many rival models as possible before making your decision, including the Chevrolet Malibu, Honda Accord, Hyundai Sonata, Nissan Altima, Subaru Legacy and Toyota Camry. Each has its own strengths and weaknesses, but few can match the 6’s all-around competence and appeal.