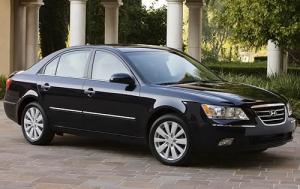 Numb feel to the steering, V6 still doesn’t quite have the gusto of main competitors.

The Hyundai Sonata receives minor exterior styling updates and an all-new interior for 2009, giving it one of the most upscale cabins in the midsize sedan class. Power and fuel economy have also been increased for both four- and six-cylinder engines, while the automatic transmission has been retuned for smoother shift quality. An auxiliary audio jack has been added to the standard features list, while the Limited trim level adds two-level heated front seats, dual-zone automatic climate control and an optional navigation system.

They say imitation is the highest form of flattery. But what happens when the imitator becomes better than the imitated?

For years now, Hyundai has had its sights set on Toyota. The Japanese giant’s strategy for its vehicles is to make them reliable, impeccably made, conservative in style and comfortable to ride in. Hyundai has taken that approach to heart, and the 2009 Hyundai Sonata is proof positive that it has gotten it right. In fact, not only has the updated Sonata caught up to the mighty Camry, it’s driven past it.

For 2009, Hyundai’s midsize family sedan sees several key changes. Both the four- and six-cylinder engines have received an influx of power, while raising fuel economy at the same time. That’s worthy of a thumbs-up any day. The biggest news, however, resides inside. While this generation Sonata’s original cabin was hardly an environment worth shaking a finger at, Hyundai was never pleased with it from the get-go. This year’s complete makeover performed on the center stack, gauges and center console has led to an overall design that is more user-friendly and better looking. Materials have also been improved, while the top-level Limited trim boasts a tasteful blend of color combinations, wood-grain accents and alloy trim. To be frank, this is the Lexus-lite interior we were expecting when Toyota’s all-star was last redesigned. Hyundai has delivered it instead.

When the Hyundai Sonata was redesigned three years ago, it gave the top family sedans a run for their money — in fact, we ranked it over the Accord and Camry in a 2006 comparison test. Since then, both of those rivals have been completely redesigned, as have the impressive new Nissan Altima and Chevrolet Malibu. The changes for 2009 bring the Sonata back closer to par. Although we’re not sure it’s still the class beater, the case can certainly be made that Hyundai has built a better Camry than Toyota did. Perhaps the imitated should become the imitator.