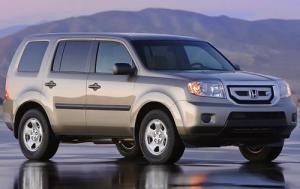 The first-generation Honda Pilot was a trendsetter, spearheading the initial wave of carlike SUVs that gave rise to the crossover SUV craze. The redesigned 2009 Honda Pilot seems designed to set a trend as well — namely, a trend toward angular, Jeep-like styling in the midsize crossover SUV segment. We’re not sure whether it will catch on, but no one will call the Pilot’s new look generic. The real question, though, is whether the virtues of the first-generation Pilot — one of our favorite midsize crossover SUVs — have been retained.

The answer is yes and no. On the bright side, Honda has made a point of enlarging third-row accommodations so that actual adults can fit back there, in part by adding an extra inch of width and 3 inches of length. Traditional Pilot traits like a well-cushioned ride, a smooth powertrain and optional four-wheel drive are also present and accounted for. However, the 3.5-liter V6, which receives only mild revisions for second-generation duty, feels sluggish compared to other V6s in this segment. Despite this lack of power, fuel economy is about equal to more muscular competitors. More distressing, though, were the long stopping distances we observed at our test track — this alone makes it difficult to recommend the Pilot.

Another departure from the past that’s not entirely welcome is the 2009 Pilot’s befuddling array of buttons for operating the audio and climate control systems, as opposed to the no-brainer layout in last year’s model. But those attracted to the new Pilot’s distinctive styling may be willing to forgive such idiosyncrasies. Maximum cargo volume remains essentially the same at 87 cubic feet, which should satisfy all but the most haul-happy families. Fuel economy, while still nothing to write home about, has improved a smidge.

Competition is stiff in the midsize crossover SUV segment. GM offers the impressive Buick Enclave/Chevrolet Traverse/GMC Acadia/Saturn Outlook quadruplets, while the Ford Flex, Hyundai Veracruz, Mazda CX-9 and Toyota Highlander are equally viable contenders. If we had our way, Honda would have done a little more to distinguish the 2009 Pilot from both the competition and its likable but aged predecessor. It’s certainly still worthy of consideration, but unless you’re smitten with the new Pilot’s tough-guy styling, we’d recommend giving other midsize crossover SUVs a thorough look as well.